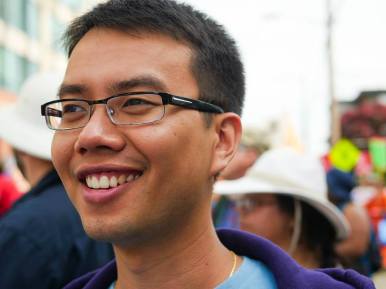 Tony is from White Center and grew up in Rainier Beach and High Point, Washington. His parents fled Viet Nam from political persecution to provide the family a brighter future. As an undergraduate at the University of Washington, Tony founded a student organization named Asian Coalition for Equality that highlights invisibilities of the Asian community. He also advocated at local, state, and national levels for resources and data that captures the realities of Southeast Asians and organized panels and presentations debunking the “model minority myth” through the SE Asian Education (SEAeD) Coalition.

From 2009 – 2012, he took part in participatory action research for the Vietnamese community and learned their strengths and needs, culminating in a report used toadvocate for resources for his community. In 2012, he founded the annual White Center 5K walk/run to foster health, build community, and raise money for local nonprofits. This belief in communities led him to student leadership work in the community college system where he advised the Queer Straight Alliance and other student organizations. From there he pursued an Ed.M. at Harvard’s Graduate School of Education.

Tony is currently pursuing his Doctorate of Education at Seattle University.  He plans to continue work in higher education providing pathways for underrepresented students to enter, graduate, and leave as critical leaders.   Tony likes to eat dessert, play mario games and board games, and watch reality television and superhero movies.